Akashic Loft
The Mini-Indian by Larry Worth 2007

There is a focus on the West Coast and Arizona on developing a new breed of pigeon, the Mini-Indian, hoping to be known as the Mindian.
The objective is to develop a miniature version of the popular Indian fantail. The current Indian fantails being exhibited are weighing in the 18 to 22 ounce range, and are considered too large by a number of pigeon fanciers. Thus there is a focus on developing a considerably smaller version that will replicate the standard Indian fantail but will weigh in the 10 ounce range.
This effort has been very challenging due to the breeds being used to cross with the Indian fantail to reduce the size, yet maintain the desired characteristics of the Indian, namely the stance, tail (feather height, number of feathers & wrap) head crest and long muffs.
At this time, color is unimportant, with emphasis being on size.
Some of the breeds being used for size reduction are American fantails, Volga tumblers and Kazaner tumblers. A critical part of the cross breeding equation is the use of small Indians which are difficult to obtain. The smaller birds, critical to our programs, are normally culled by top Indian breeders who are focusing on 20 ounce birds for the purpose of exhibition and championships.
The Standard for the Indian fantail asks that with all else being equal, preference is to be given to the larger bird.
Our Mindian Standard will call for the smaller bird to be preferred with all else being equal.
For my program, I am using Indian/American crosses to Kazaner/Indian crosses and breeding back sons to mothers. My average weight this year is 12 ounces ,with an occasional 10 ounce bird. My goal is to achieve good 11 ounce breeding stock next year and 10 ounces the following year.
Mindians will be exhibited at the Pageant this November, being judged by Dan Skiles. There will be a Mindian breeder meeting at the Pageant where the Mindian Standard, generated by California Mindian breeder, Richard Schlais, will be discussed and voted on. This meeting will outline the issues necessary to formalize a Breed Club and submit NPA application for breed recognition.
This downsizing has produced mellow birds with good parenting traits, however they can FLY!
Larry Worth 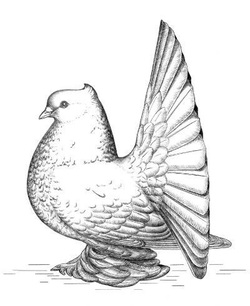