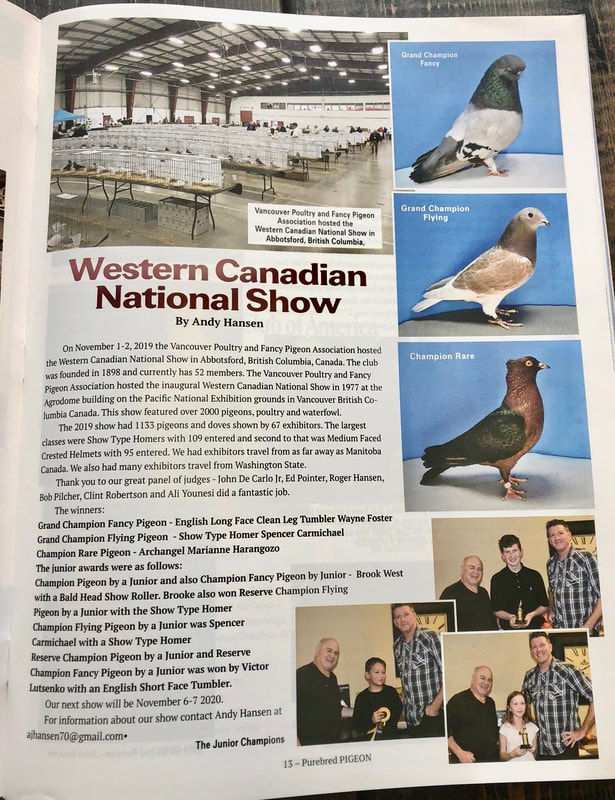 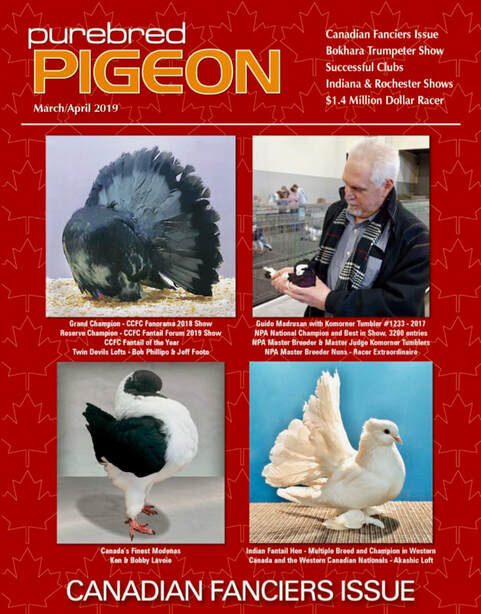 Article written for the March-October 2018 edition of the Feather Fancier magazine. ​​ 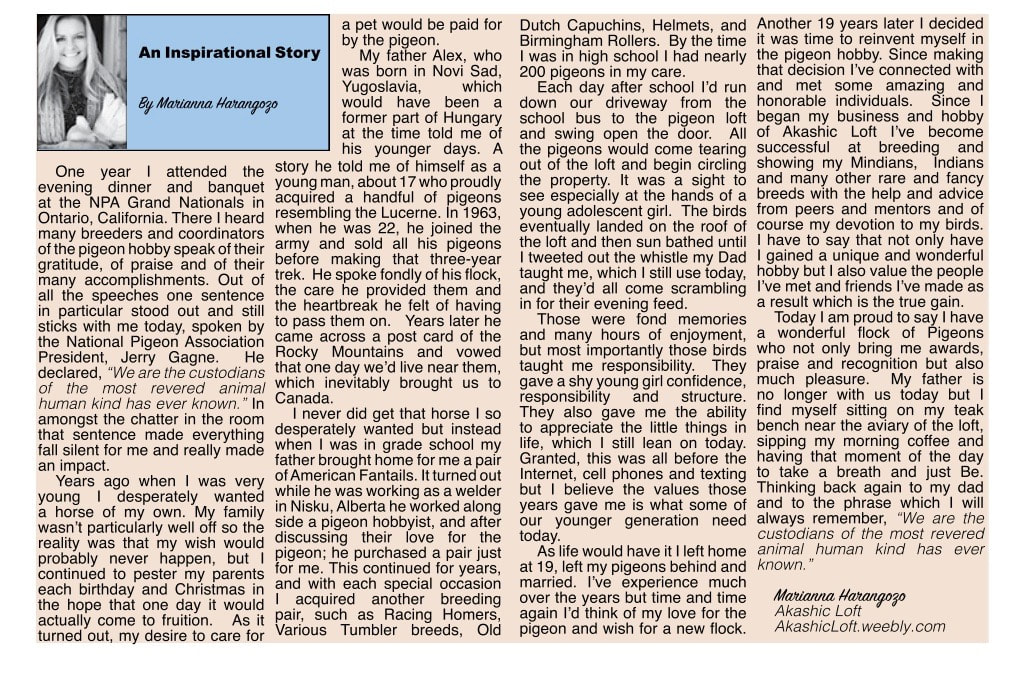 Featured article written by Akashic Loft in the 2016 winter edition of the Canadian Dove Association magazine. 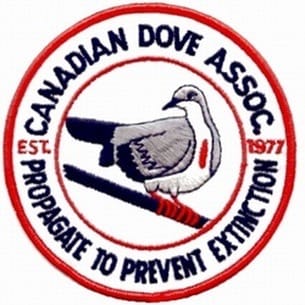 ​The Vancouver Poultry and Fancy Pigeon Association hosted another successful Western Canadian National Show for pigeons and doves, in Abbotsford, BC on November 4-6, 2016. This show was the largest the club has hosted since 2006, as there were 1021 entries, with 58 breeds and 52 exhibitors.

I was glad to be a part of the show with several pigeon breeds of my own as well as my ring neck doves.  The Ring Neck Dove class displayed a beautiful array of doves in every color imaginable, from lavender neck to pied to spread ash.  It was an exciting day as I watched the judging take place.  Bob Sutherland of Marysville, Washington judged the dove class.

I had the privilege of spending some time discussing the doves with Bob and Elaine.  Bob Sutherland who was soon to turn 89 years of age explained to me his past, with his “good Scottish name” and his 60 years of being a sanctioned judge of pigeons and doves.  The stories were sweet and it was amazing to me that he spent a lifetime learning, raising, teaching and judging these birds that we all love.

He described to me the better doves in the class and on what basis they were judged. He taught me how to station with a judging stick by, “going to the eye first, then to lead their head up a bit, back them up, and once they move forward they station properly as they should.”  This I’ll put into practice in my own show training!

I asked him about the Champion Dove and the Reserve Champion Dove and why he and Elaine chose them. He explained that the Champion, the Wild Type Dove Cock (pictured here) had a proper length of 10”.  He had nice finch marks and a nice white fringe around the edge of the tail.  He said that he found the color dark but very nice and most importantly the bird looked like it was “ready to take off.  One of the main functions of a dove is to be ready to take off.”

Bob then described the Reserve Champion Dove (also pictured).  She was a Spread Ash Dove Hen and was described by Bob as having the perfect color, station and a great tail as the tail was nice an narrow, the way a doves tail should be.

I was honored to be the one who placed with both of these beautiful birds, but more importantly to gain the experience of a show so grand and the knowledge from judges as experienced as Bob Sutherland and Elaine Chatwin.

Needless to say the entire show looked amazing, especially Champion’s row, which in the previous couple of years only honored pigeons but this past year also held a couple of prize doves.  I’m hoping the addition of doves this past show will encourage many other dove breeders to participate in next years show so that we may grow this division into a Western National Dove Show.

In 2017 The Vancouver Poultry and Fancy Pigeon Association will be hosting the CPFA National Classic, and the 40th anniversary of the Western Canadian National Show, and again showing a dove division.  If you live in western Canada and are interested in showing your doves in next years V.P. & F.P.A. Western Canadian National Show then please contact Marianne at AkashicRanch@gmail.com or keep you eyes on the club website at vancouverfancypigeon.ca for show updates. 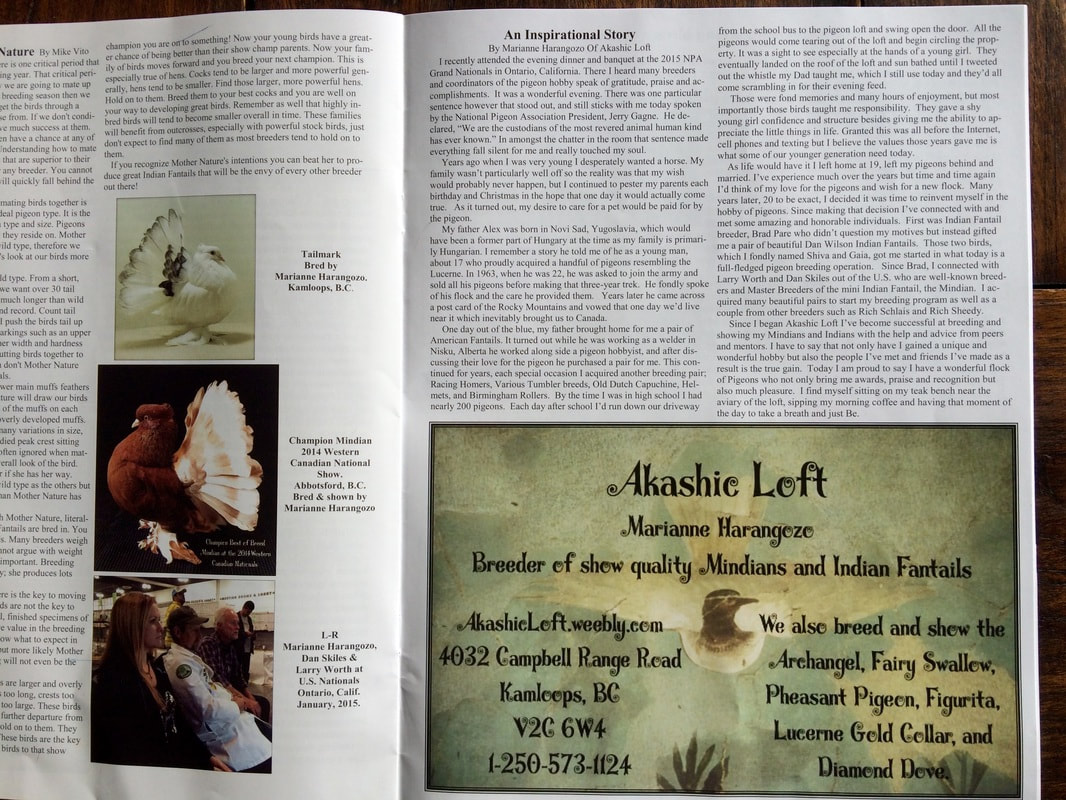 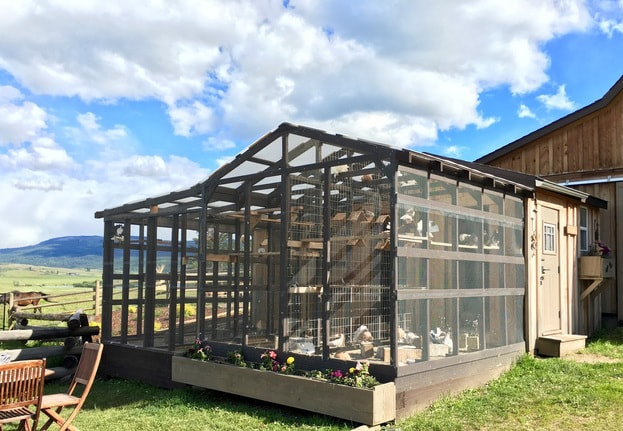 The wild Band-tailed Pigeons in Harrison Mills, BC. 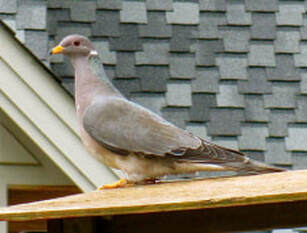 Some information about the Band-tailed Pigeon:
They are 36 cm overall in size with a wingspan of 66cm.  Their colouring is grey with purplish head, breast, black-tipped yellow bill, grey rump, pale grey band on tail, yellow legs, and white bar above iridescent feathers on nape (absent in juveniles), with a dark underwing visible in flight.  Fairly common summer resident in BC, uncommon in winter; most go south September-October, return late February, with a range from southwestern BC, Colorado, to Argentina.  You'll find them in well-treed neighbourhoods, parks, marine shorelines, and foothills.  They breed in low-elevation coniferous, mixed forests but uncommon to mountain passes.  They prefer tall conifers, forest edges with nearby open species.  They feed mostly on nuts, seeds, fruits of deciduous trees, shrubs such as oak, cherry, elderberry, arbutus, and cascara, and are attracted to feeders with black oil sunflower, cracked corn, and millet.  They usually forage and travel in small flocks.  When taking flight their wings produce a loud clapping noise.  Their voice is a low, repetitive "whoo oo whoo". 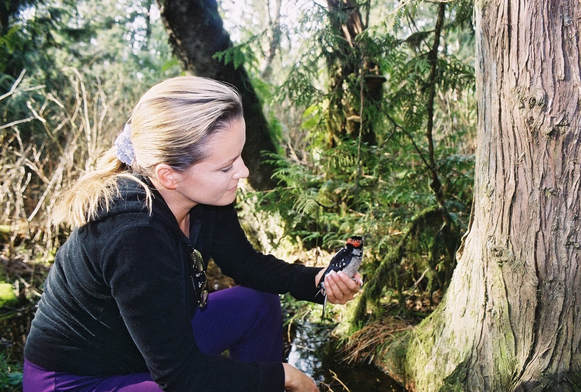